On January 21, 2016 the EMA of BC put on the ever-popular Annual Legal Update, followed by a great social event at Rogue Wetbar. The event attracted over 80 attendees including industry, consultants, government representatives and technical providers. Three speaker sessions engaged the audience covering topics such as notable environmental case law, species at risk, migratory birds, as well as a summary of new and upcoming legislation.

The EMA of BC was pleased to present the second speaker Janice Walton from Blakes who is a leading practitioner in the federal and provincial regulation of wildlife and, in particular, endangered species. Janice provided for interesting dialogue related to Recent Developments on Species at Risk and Migratory Birds. Notable highlights included:

The final presenter Gord Buck, from Alexander Holburn Beaudin and Lang LLP, summarized significant regulatory changes over the past year as well as a look ahead with Regulatory Update 2016: New and Upcoming Developments of Note. Key highlights included:

Following each speaker, the question and answer period included additional insight for attendees as the speakers provided thoughtful responses and interesting dialogue.

The night was capped off with a well-attended EMA of BC social event at the Rogue Wetbar, a great way to mingle and network with other professionals. 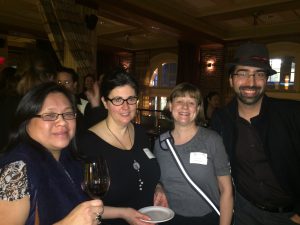